I joined the Liberal Democrat Party in June 2016 immediately after the referendum. I was devastated by the result. I feel the UK will be stronger remaining in the EU. I have always favoured the Liberal Democrats and the party felt a natural fit for me, especially with their pro-remain stance.

I joined the LibDems with the intention of being active in the party although at the time I had no idea how. I just felt that to try and make a difference I needed to take part and not just observe. The first thing I did was search for my local party page on Facebook, I found Tameside Liberal Democrats Facebook page. Then I discovered the LibDem Newbies UK Facebook page and was warmly welcomed by everyone. I realised then that I had made the right decision. I made contact with Tameside Liberal Democrats and was invited to my first LibDem pint just before Christmas 2016. It was great; there were representatives from my local party and also people from the more experienced Hazel Grove LibDems. I was warmly welcomed and given loads of really good advice. I came away feeling ready to take an active part. I attended a Christmas card and leaflet delivery session in Romiley. 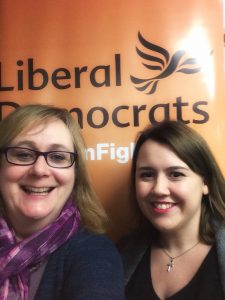 Tameside Liberal Democrats will be hosting some events in the coming months, Action Days (leaflet dropping and door knocking) and social events such as LibDem pint, Libertea and some slightly posher dinners. We are looking forward to meeting members at these events.

I look forward to meeting everyone very soon and making a real difference in my community.