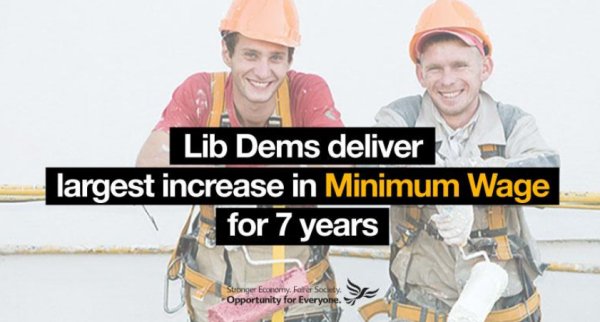 Liberal Democrat Leader and Deputy Prime Minister Nick Clegg has announced that the National Minimum Wage for apprentices will increase by 20 per cent going up by 57p an hour, from £2.73 to £3.30 this October.

This is the largest ever increase in the National Minimum Wage for apprentices. 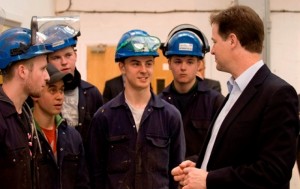 Nick has also announced that the adult National Minimum Wage will increase by three per cent to a new rate of £6.70 this October.

This is the largest real-terms increase in the National Minimum Wage since 2008 and is set to benefit more than 1.4m of Britain’s lowest paid workers.

The increase in the apprentice National Minimum Wage will halve the gap with the rate for 16 to 17 year olds, which will increase by two per cent, from £3.79 to £3.87 per hour.

Nick said, “This is just one of the many ways in which we’ve created a fairer society whilst building a stronger economy.

“If you work hard, this government is behind you all the way. Whether you’re on low pay or starting your dream career through an apprenticeship, you will get more support to help you go further and faster.”

To mark National Apprenticeship Week 2015, Liberal Democrat Leader and Deputy Prime Minister Nick Clegg is urging young people and businesses alike to draw on the many benefits of apprenticeships.

National Apprenticeship Week runs from 9-13 March and celebrates the positive impact that apprenticeships have on individuals and businesses.

In his message, Nick highlights research showing that a fifth of all apprentices progress to higher education and that gaining a higher-level apprenticeship can boost lifetime earnings by £150,000.

Earlier this month Nick announced that a Liberal Democrat government will protect funding for the Holocaust Education Trust’s ‘Lessons from Auschwitz’ project for the next five years.

The deal will help to create 5,000 jobs, support over 75,000 people learning new skills and generate up to £80million in private and public investment.

Commenting, Hazel Grove MP Andrew Stunell said, “This is very welcome news for our area. The money for the transport interchange in Stockport is an excellent signal of support for regeneration in the town centre, which is vital for long-term prosperity.”

Devolving power and funding to Greater Manchester will allow the region to shape its future and deliver the changes needed to improve the infrastructure and create thousands of jobs.”

Mark Hunter, MP for Cheadle said, “The Greater Manchester Growth Deal is terrific news for Cheadle constituency and the wider region. Along with the redevelopment of the public transport hubs and the additional support for local businesses, I am delighted that there will be new money to enhance local further education colleges – it is imperative that we continue to invest in our young people by providing more apprenticeship opportunities.”

The key features of the deal are:

The Greater Manchester Growth Deal is part of a £12 billion long-term programme to revitalise local economies. The deals are the latest and greatest example of the British economy being rebuilt from the bottom up, and sharing the benefits of the recovery around the country.

The Deputy Prime Minister, Nick Clegg, said – “The Greater Manchester Growth Deal will create thousands of jobs, provide incredible new training opportunities for young people, and improve transport links across the region for people and their families; building a stronger economy and a fairer society.”

“We’re placing the power and money in the hands of people in Greater Manchester who know how to spend it best, making a real difference to local communities.”

Tameside’s Lib Dem MEP has been shortlisted to win a prestigious award for his services to the environment. Chris Davies has been nominated to become a Parliamentarian of the Year for his work in promoting reform of Europe’s common fisheries policy.

All 766 MEPs will now vote to select the winners in each category who will be presented by The Parliament magazine with their awards at a ceremony in Brussels next month.

Chris has led the 85 strong European Liberal Democrat group on the EU Parliament Environment committee since he was elected in 1999. He has been described by WWF, the Worldwide Fund for Nature, as one of the ‘most influential’ MEPs for building coalitions in support of measures to protect the environment.

The MEP formed a cross-party campaign group, ‘Fish for the Future’, which helped to secure the votes of 502 MEPs in favour of ambitious reform.

The new fisheries policy is already being credited with helping to rebuild Europe’s depleted fish stocks. A ban on the discard of fish will be phased in from next year.

Davies said, “Reforming the CFP was a team achievement and I am hugely pleased to have played a part in bringing it about.

“Overfishing and bad practices have cut fish stocks and cost jobs, but we now have fishermen and scientists working together to bring about improvement. The future for fish and our fishermen is looking bright.”

“I was elected as an MEP to work with our European partners to find shared solutions to the problems we face in common. Our new approach to fishing policy shows how successful that can sometimes be.”

Davies’s rivals for the award on the shortlist are French centre right MEP Maurice Ponga and German Green Reinhard Butikofer.

The Yes Campaign for the Fairer Votes referendum now has its new website up and running.

To mark the launch of the site, and the start of the six month countdown to polling day, they also organised activities at a range of bonfire night events.

On Friday, the High Court upheld the decision of the Parliamentary Election Court for Oldham East and Saddleworth and dismissed ex-Labour MP Phil Woolas’ appeal.

Commenting after the decision at the Royal Courts of Justice, Liberal Democrat candidate for Oldham East and Saddleworth, Elwyn Watkins, said:“This judgment makes it clear once again that if you knowingly lie in your election campaign and deceive your constituents you should be kicked out of parliament. This is a victory for the people of Oldham and Saddleworth.
“Once again, I am grateful for the sterling work and support my excellent legal team have provided throughout and for the considered verdict of the High Court Judges.
“Now it is time to move on and for the by-election to take place. The people of Oldham East and Saddleworth have been without an MP for long enough. They need to be able to choose a new Member of Parliament as soon as possible.
“With just 103 votes between Labour and myself at the General Election, it is going to be a very close contest. I hope that local people will back someone who has a track record for standing up for what he believes in.”
Useful links
Categories
Login to the site
Site RSS feed